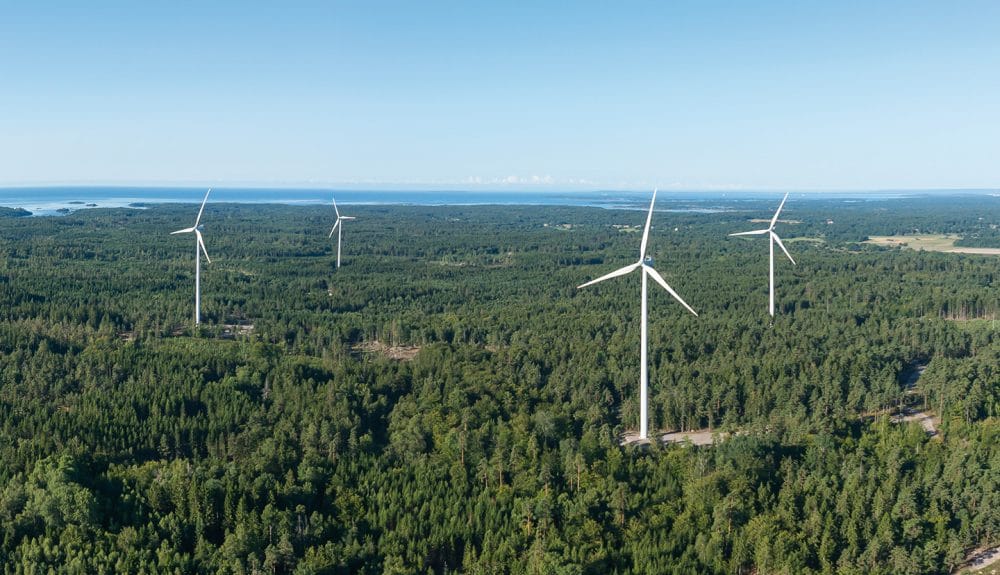 Eolus is now one of Sweden’s leading wind power developers. Eolus has participated in the establishment of more than 500 of the wind turbines currently operating in Sweden. Most of them were sold to customers as turnkey facilities.

1990
Eolus Vind is founded to construct and manage wind turbines

1990/91
Land is acquired on Öland, and Eolus establishes its first two wind turbines with a capacity of 225 kW.

1998/99
Eolus sells the majority of its holdings of Ekovind AB, which specializes in managing wind power facilities.

2001/02
The first 1.8 MW turbines are developed at Annelöv in Skåne. The carrying amount for Eolus-owned turbines is SEK 20 M.

2003/04
Eolus participates in the establishment of a wind farm at Löberöd in Skåne with seven 2 MW turbines. This is the company’s 100th turbine. The head office is relocated from Osby to Hässleholm. The company opens an office in Vårgårda.

2004/05
The project portfolio grows sharply. Total assets increase to over SEK 100 M. Additional staff are hired in both Hässleholm and Vårgårda.

2005/06
During the year, 15 wind turbines with a total capacity of 16.3 MW are established. The company opens an office in Falun.

2006/07
26 wind turbines with a total capacity of 29.0 MW were installed. Eolus participates in the construction of two wind turbines in Estonia. More new hires. The company opens an office in Falkenberg. In June 2007 other owners’ shares of Ekovind AB were acquired through a non-cash issue.

2007/08
During the year, 26 wind turbines with a total capacity of 32.0 MW are established. The company opens an office in Motala.

2008/09
29 wind turbines with a total capacity of 48.2 MW are established. Eolus’s Class B share is listed on NASDAQ OMX First North in May 2009. Eolus has participated in the establishment of over 200 wind turbines since its inception. The Group achieves the highest net sales and profit after financial items in the its history. Eolus increases its investment in Blekinge Offshore AB, which is developing an offshore project in the Bight of Hanö, to 60%. A company office moves from Falkenberg to Halmstad. Eolus’s first turbine with a tower height over 100 m is established at Ugglum in Mellerud.

2009/10
54 wind turbines with a total capacity of 96.6 MW are established. The company invests SEK 210 M in its own wind turbines. Eolus is named the fastest-growing company in southern Sweden in Dagens Industri’s gazelle survey. The company opens an office in Sundsvall. The Parent Company raises SEK 158 M through a new share issue. Both sales and total assets surpass SEK 1 billion.

2010/11
50 wind turbines with a total capacity of 100 MW are established. The company’s 300th turbine becomes operational. Eolus acquires all shares of Svenska Vindbolaget AB through a non-cash issue. The acquisitions adds locations for about 500 wind turbine to Eolus’s project portfolio, over 50 of which already have permits issued. Gustaf Ekberg took up the position of Eolus Vind CEO in October 2010. The company opens offices in Uddevalla and Kil. Eolus’s largest project to date, Tolvmanstegen, is initiated in the Municipality of Strömstad. The project comprises a total of 22 turbines with an installed capacity of 44 MW. Net sales rise by 16% to SEK 1,629 M.

2011/2012
Eolus’s largest project to date, Tolvmanstegen, is completed in the Municipality of Strömstad. Tolvmanstegen comprises a total of 22 turbines with an installed capacity of 44 MW. Eolus founds a subsidiary in Norway. The company begins a restructuring process that entails staff cuts, a concentration of the business to fewer offices and some degree of reorganization. Company CEO Gustaf Ekberg leaves and Deputy CEO Per Witalisson becomes the new CEO.

2012/2013
The business is reorganized in response to changing market conditions. The reorganization includes reducing total headcount by 20 positions and closing some smaller offices. Eolus has now installed over 400 turbines. During the fiscal year, the company’s largest-ever contracts with individual customers are secured. German company Munich Re acquires 14 operational wind turbines and Eolus signs an agreement to divest 12 wind turbines to Danish company European Wind Investment A/S (EWII). Eolus divests the construction-ready Mullberg Project in the Municipality of Berg, with a capacity of 80 MW, to Skanska and Jämtkraft.

2013/2014
Eolus signs a power purchase agreement (PPA) with Google. The agreement means that Google will buy all of the electricity from 29 wind turbines (59 MW) installed by Eolus in 2014 for a fixed predetermined price, in order to supply its data center in Finland with renewable electricity. The company secures its financing needs of a total of SEK 770 M for the next two years.

2014/2015
Eolus signs an agreement with ews and Aquila to sell the four wind farms that were built in the municipalities of Hjo, Tanum, Laxå and Falkenberg to sell electricity to Google in accordance with the above-mentioned PPA. The EUR 95 M deal is Eolus’s largest to date. NVE grants Eolus a permit for the large Øyfjellet wind power project in Norway, which will enable the installation of turbines with an output capacity of up to 330 MW, divided between 80-110 wind turbines, depending on the type of turbine. The final permitting decision is made by the Norwegian Ministry of Petroleum and Energy. Eolus and Region Skåne sign a wind power purchase agreement, where Eolus is to deliver six turnkey wind turbines to Region Skåne in the largest public procurement of wind power is Sweden to date. The six turbines are part of the Fröreda wind farm in the Municipality of Hultsfred consisting of seven Vestas V126 3.3 MV wind turbines. An Extraordinary General Meeting resolves on a special dividend equivalent to SEK 10 per share.